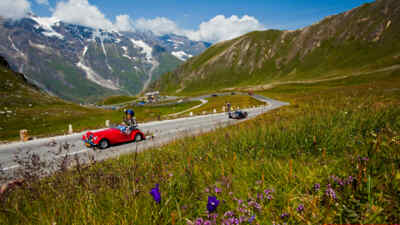 Those who love vintage cars and are fascinated by Salzburg’s mountains know only one thing: a drive on the Grossglockner High Alpine Road that doesn’t overburden older motors with its gentle inclines and easy and entertaining turns. Exhibitions, educational and panoramic trails and numerous rest stop options along the road ensure lots of variety. Great views of the sea of 3,000 m peaks and the Glocknermassiv make the hearts of pleasure drivers and vintage car drivers beat faster immediately. Lovingly maintained pre-war vehicles are used for the annual vintage car grand prix in September. Be there the next time we say: “Ladies and gentlemen, start your engines!” 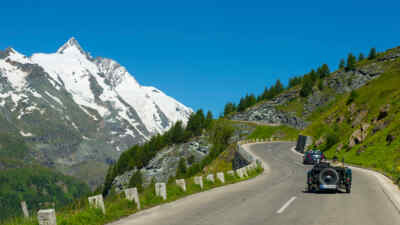 Tours for connoisseurs: driving through Salzburg and Carinthia with a vintage car

A trip with a historic car or a convertible has nothing to do with hurrying or stress. Unhurriedly swerve on the Grossglockner High Alpine Road on a total of 48 km from Fusch-Ferleiten to Heiligenblut or the other way around. An sure high point for automotive fans is the automobile exhibition on the Kaiser-Franz-Josefs-Höhe, the highlight of the alpine road with a direct view of the Grossglockner and Pasterze. Here you’ll encounter the first mobile conquerors of the alpine road dating back to the year 1934 and many other vehicles of historic importance. The 96-page enjoyment driver brochure gives you tips for your Glockner drive, gastronomy and accommodation, information about opening hours and tour suggestions for other alpine roads.

Recalling the very first mountain contest on the Grossglockner High Alpine Road, which took place on the day after the grand opening, 4 August 1935, numerous vintage car fans meet every year in September for a fairly competitive contest with a varied supporting programme. The regularity rally on the authentic original route from the years 1935-1939 is the highlight. The course from Ferleiten to the Fuscher Törl covers 15 km, 92 turns and 15 bends. In September 2015, the 80-year anniversary of the very first race, 115 starting teams from seven countries participated with cars built between 1920 and 1974 tackling the beautiful mountain route. The participants included vintage cars by Porsche, Jaguar, Lotus, Bentley, Austin, Riley, Veritas and other manufacturers. Here’s how you can participate:

The annual vintage tractor meeting in Bruck/Fusch with World Championship, also taking place in September, is a bit more rustic but just as varied. For years, 500 tractors from more than ten nations have taken part in this vintage meeting in Austria. The highlight of the four-day event is the drive on the Grossglockner High Alpine Road from Fusch-Ferleiten to the Fuscher Törl. Visit the event and marvel at brawny machines from Magirus Deutz, Steyr, Land Bulldogs, Hanomag, Fendt and many other legendary manufacturing companies.


Experience these and many other great vintage events on the Grossglockner: find events, such as the Vespa Alp Days, Saalbach Classic or the Fire Service Vintage World Championships, in the event programme of the Grossglockner High Alpine Road!